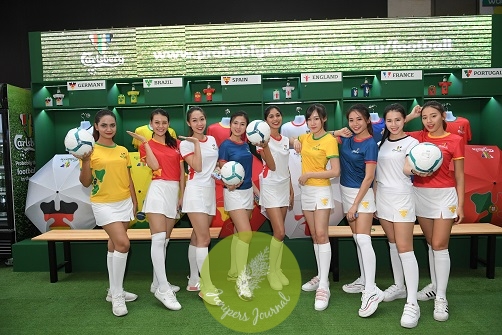 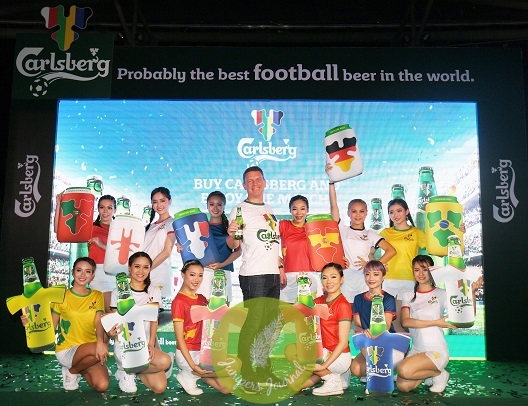 As the countdown begins to the most anticipated football event of the year, this is your chance to score limited-edition merchandise from Carlsberg “Probably The Best Football Beer” Campaign. The campaign calls out to beer lovers and football fans alike to collect merchandise of their favourite country namely England, France, Germany, Brazil, Spain and Portugal. 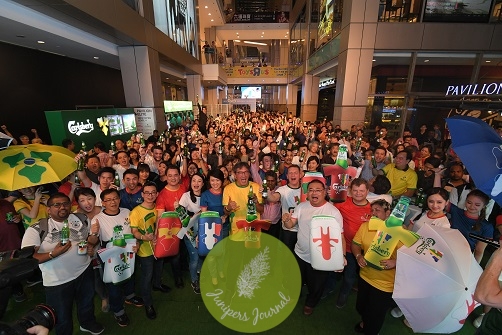 If you are into football collectibles, here’s “Probably The Best Football Merchandise” for you! The design of country flags in vibrant colours is spotted on the limited-edition merchandise such as jerseys, invertible umbrellas, jersey-shaped bottle cooler and can cooler sleeves, which are up for grabs during this two-month long promotion at participating bars, pubs, coffee shops and food courts, from now till 15th July.

Passionate about football but not into the ‘nightlife’ scene? Enjoy the matches in the comfort of your homes and be rewarded a free beer can cooler sleeve as an instant gift when you purchase limited-edition football-themed Carlsberg or Carlsberg Smooth Draught at major super- and hypermarkets and convenience stores.

As Malaysia is a hotbed for football fandom, Carlsberg is pulling out all stops to provide consumers with “Probably The Best Football Beer Parties” with over 3,000 parties nationwide including East Malaysia. Be part of the action and get your adrenalin pumping and stand a chance to win exclusive merchandise.

At the media and trade launch held at Connection in Pavilion KL, Carlsberg Malaysia’s Managing Director Lars Lehmann said, “Bringing alive “Probably The Best” beer experience for our consumers, we believe that the “Probably The Best Football Beer” campaign is all we need to unite football fans. As Malaysians gear up for the most anticipated football event, we want to reward our consumers with exciting promotions, exclusive merchandise, interactive online game and limited-edition products designed in vibrant colours of Carlsberg’s signature hop leaf shape with the flags of Brazil, Germany, Spain, England, France and Portugal.”

“Upping the football excitement, there will be over 3,000 parties nationwide including in East Malaysia, for football fans to enjoy football matches among ardent football fans with chilled Carlsberg and Carlsberg Smooth Draught beers,” he added.

“Furthermore, the campaign is also hitting the digital scene with “Probably The Best Football Beer Game”. It’s an online game where football fans can play and use their football knowledge to predict the scores and win an all-expense paid trip to watch a Liverpool FC match LIVE in the UK with a friend!,” Lars revealed.

Do take part in Carlsberg’s “Probably The Best Football Beer Game“, accessible at www.probablythebest.com.my/football to be in the top of the leaderboard. In addition to the online game, football fans can catch up on the latest football news updates, upcoming matches, results, selected outlet parties’ details and the ongoing nationwide promotions by simply bookmarking the page.

There’s a load of footie interaction activities in store at selected outlet parties like “Probably The Best Foot Pong”, and Football Trivia Challenge. Winners can take home an exclusive “Probably The Best Football Kit” consisting of jersey, umbrella, limited-edition Carlsberg and Smooth Draught with bottle and can cooler sleeves. There’ll be Bonus Codes giveaways to earn extra points for the online game. That’s not all, successful participants can also stand a chance to walk home with either a Hisense 39″ LED TV or a Vivo V71 Smartphone, courtesy of Hisense and Vivo.

Carlsberg is not stopping there! Taking it a step further, the brand also provides consumers a chance to “Buy and Win” at roadshows held at participating hypermarkets. Consumers just need to make a purchase of a carton of Carlsberg or Carlsberg Smooth Draught and will be able to participate in the game to deliver their best kick and walk away with football merchandise. There is also the “Swipe and Win” contest for consumers to win football merchandise, and also to score exclusive party passes for them along with three friends to enjoy the vibrant atmosphere. 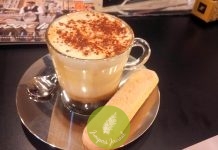 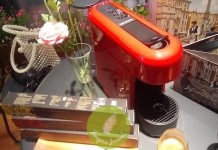 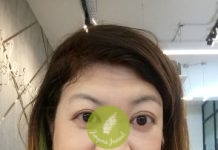