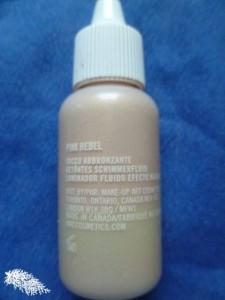 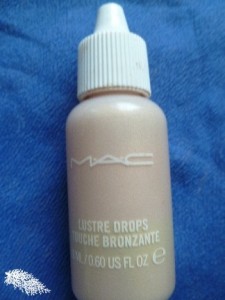 MAC’s Lustre Drops are essentially skin highlighters which were first launched in the Style Warriors Collection in 2009. They made a reappearance in the To The Beach Collection last year and that’s when I picked up Pink Rebel, one of 2 Lustre Drops, the other being Sun Rush.

Pink Rebel is more peach-champagne than pink and has subtle shimmer fo giving that sun-kissed glow and luminosity to whichever part of the body you choose to highlight, be it the cheekbones, shoulders, decolletage or even arms.

Although MAC’s Strobe Cream also highlights the face, Lustre Drops are more versatile and they have colour which gives more sheen. Lustre Drops can also be used on the eyelids as a base for eyeshadow or pigments. It makes eyeshadow brighter and more vivid (please see pic below). Eyeshadow becomes slightly creamy when mixed with Lustre Drops.

There are two ways I use Pink Rebel as a face highlighter. When I’m feeling lazy, I just mix a bit of Pink Rebel with whatever foundation I’m using and it gives my face an all-over glow. It makes my complexion look less dull and tired. It creates an instant glow which is more apparent when I’m outdoors.

Another way of using Pink Rebel is by applying foundation and loose powder first and then dab a bit of Pink Rebel on the cheekbones. Since I purchased Pink Rebel, I have been using it sparingly and although I don’t use it everyday, I do use it several times a week. Even so, it’s so economical that I’ve only used half the bottle so far. 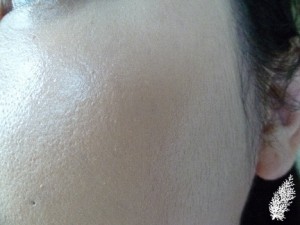 Most of the time though, I just mix Pink Rebel in with my foundation as it’s less time consuming that way. The tiny nozzle on the bottle is practical as I never find myself squeezing out more than I need and that’s really very little.Pink Rebel reminds me of Benefit’s High Beam highlighter but I haven’t tried that so I can’t compare. However, Pink Rebel can be mixed with moisturizer just like High Beam on days you just don’t feel like using foundation yet want your skin to look glowing.High Beam is 13ml at RM102 whereas the Lustre Drops are 18ml at RM75. There is quite a lot of difference pricewise. That works out to RM7.85 per ml of High Beam compared to RM4.15 per ml of Lustre Drops.Christine of Temptalia has mentioned that Lustre Drops will be introduced into the permanent range beginning April 7th in the U.S. so I guess it’s only a matter of time before they will be part of the permanent range here. It’s a product I’ll repurchase as I’ve got good results with it and it’s relatively reasonably priced.