After a media event and lunch at KL Tower, most of the media made their way up to KL Tower’s Sky Deck as we were given a set of tickets which entitled us to visit the restaurant level and the Sky Deck. The highlight of the Sky Deck is of course the Sky Box which is completely made of glass including the floor which can be a bit unnerving for those who suffer from vertigo. A maximum of 4 pax can stand on the Sky Box at any one time and you have to remove your footwear and leave your bags on a bench before entering the Sky Box. Each party of 4 has a minute and a half to take their photos but I did notice that some groups took way more than 5 minutes but the guard in charge of the Sky Box did nothing.

When groups enter the Sky Deck, they are given a number and even though we were there on a weekday after lunch, we still had to ensure a more than half hour wait. My group went to Sky Box 1 which is a more bearable wait than at Sky Box 2 as it’s a lot hotter over there.

My last visit to KL Tower was when they first opened way back in the 1990s so it’s been about 25 years since my 1st/last visit. I don’t think they even had the Sky Box then. I didn’t take any photos at that time as mobile phones didn’t have cameras and I didn’t bring a camera with me. 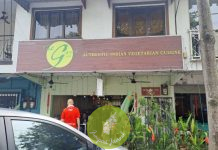 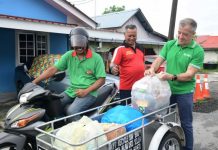