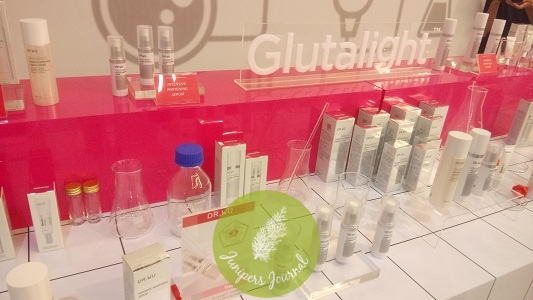 Glutathione has long been consumed orally as an antioxidant-rich skin lightening supplement  and also as the main ingredient for whitening injections. For the first time ever, beauty fans can now skip the pills and needles as Dr. Wu Glutalight™ Whitening System pioneers in the utilization of Glutathione as a skincare ingredient, adopting advanced patented Japanese technology to develop an extremely stable yet effective form for direct application. Formulated with advanced ingredients, AA2G (Ascorbyl Glucoside), Hyalo-Oligo®, Silybum Marianum extract, Vitamin B3, B5 and B6, this latest range is the ultimate all-round whitening powerhouse.

Extensive research done by Dr. Wu labs indicate that to achieve a porcelain-like skin, a skincare has to be multi-faceted to target various pre-existing skin conditions and perform various functions simultaneously. Firstly, it needs to PROTECT the skin from the damages of UV radiation and harmful free radicals. These are the main culprits in the degeneration and darkening of the skin. It also needs to be able to SUPPRESS the skin from producing too much melanin. Melanin is responsible for the intensity of colour on a person’s skin – the more melanin, the darker the skin colour. Thirdly, it needs to help the skin REVERSE existing damage. pigmentations and dark spots caused by UV damage on the skin. And lastly, a good skin lightening product needs to also deeply HYDRATE the skin to keep it supple and plump throughout the lightening process for a well-rounded beautifying effect.

Under this premise, Dr. Wu Glutalight™ Whitening System was formulated to create the ultimate all-rounder whitening product with Glutathione as its star ingredient. Applied directly onto the skin, Glutathione works to protect the skin from UV damage while suppressing the production of skin-darkening melanin. Working alongside with other key ingredients like AA2G (Ascorbyl Glucoside) for prolonged suppression of melanin production, Hyala-Oligo® a stabilized, small molecule version of the regular hyaluronic acid that enables it to quickly pass through skin cells for long lasting and effective hydrating effect, Silybum Marianum extract, derived from the milk thistle plant, to protect against oxidative damage to the skin, Vitamin B3 to lighten dark spots and pigmentation, Vitamin B5 and B6 and micro molecule Hyaluronic Acid to soothe inflammation and moisturize the skin, Dr. Wu Glutalight™ Whitening System packs a punch as whitening products that deliver on every level.

According to the test report conducted by Providence University’s cosmetics laboratory, for 40 individuals aged 20-50 years old who used the Glutalight™ Whitening System on a daily basis for 28 days, results showed that 97.5% of the respondents noticed fairer skin with Glutalight™ Whitening serum, 95% felt improved skin clarity, 95% felt it reduced skin darkness, 97% felt improved skin moisture while 100% felt an improvement in evenness. Respondents noticed a marked improvement in skin’s radiance between 7 to 28 days as well as a decrease of shallow and deep level spots whereby 82.5% reported a decrease in the number of spots, while 92.5% reported a significant decrease in the areas covered in dark spots. In summary, Dr. Wu Glutalight™ Whitening System is unlike regular whitening products. It simultaneously performs 5 different functions in just one bottle; whitens, soothes and hydrates, brightens dull skin, creates an in-depth anti=pigmentation and lastly evens out the skin tone on the face.

These are the 4 products in Dr. Wu Glutalight® Whitening System range:

A serum-like toner that can quickly achieve all-in-one whitening effect. The very first to use the revolutionary “Glutalight™” formula containing the Japanese patented Glutathione which uses AA2G, HerbEx Silybum Extract™, Vitamins B3, B5, B6 and adds Allantoin to soothe skin, with whitening and moisturizing effects, effectively decreases the appearance of pigmentation and lightens dull and uneven skin tone. It can be used during the day or as a facial treatment skincare and is acid-free.

Packed with the highest concentration of whitening ingredients. It evens uneven skin tone and lightens dark spots. The very first to use the revolutionary “Glutalight™” whitening formula containing the Japanese patented Glutathione which uses AA2G, HerbEx Silybum Extract™, Vitamins B3, B5, B6 and micro molecule Hyaluronic Acid to fully prevent production of melanin for a rapid and longer lasting whitening effect.

A lotion with lightweight creamy texture, it is the very first  to use the Japanese patented revolutionary “Glutalight™” whitening formula along with AA2G, HerbEx Silybum Extract™, Vitamins B3, B5, B6 and micro molecule Hyaluronic Acid which can decrease the appearance of pigmentation and also soothe and moisturize the skin.

A lightweight textured eye serum which uses the revolutionary “Glutalight™” whitening formula containing the Japanese patented Glutalight along with AA2G, HerbEx Silybum Extract™, Vitamins B3, B5, B6, micro molecule Hyaluronic Acid and Haloxyl to improve firmness and reduce the appearance of dark circles around the eye area. 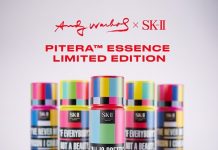 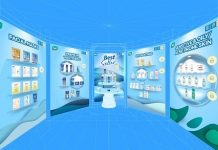