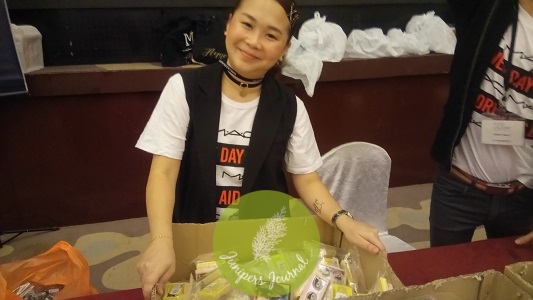 As of yesterday, I was still debating whether to attend the  Estee Lauder Companies Sale 2018 today but my curiosity got the better of me as I have attended for so many years and I just had to see what was on offer this year. Last year I got to Berjaya Times Square Hotel Manhattan Ballroom by 6.30am and today I was there by 7am. There wasn’t much of queue compared to previous years at that time probably because the time the doors would be opened was pushed back by an hour this year. This year, the doors would be opened for VIP customers at 9am which meant around 8.30am. I was there too early. There were 13 people ahead of me in the VIP queue and it was another half an hour before there was someone behind me.

I got to meet my reader Cindy and her sister. It was so nice of Cindy to come up and say hi. I really appreciate it as I love to meet my readers and hopefully there will be more opportunities in future to meet more of you.

This year, the event is better organised as there is a sorting area with tables for shoppers to sort out what they want/don’t want rather than have them ‘camp’ out anywhere they could sit down as in previous years. Of course people will take whatever they fancy at the risk of the product being taken by someone else and take it out of their bag later just before heading to the cashier if they feel they don’t need/want something.

There were a lot of products at MAC and I was initially overwhelmed by the choices, most of the prices were extremely reasonable. Makeup addicts like me would have felt slightly faint at the number of products.

The most value buy from MAC is definitely the set of 2 pigments, one of which is from the Rossy De Palma Collection which alone is already worth RM105. The set is just RM30 and that is my one and only purchase. I left before 9.30am as I didn’t want to be around when the door opened for the rest of the customers which would make snooping around the tables rather difficult.